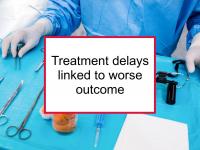 Treatment delays linked to worse outcome
Undue delays between breast cancer treatment steps have been reported to be associated with less favorable outcomes, although not all studies are in agreement. A delay potentially can occur simply as a result of scheduling problems each time a women transitions between different treatment providers.
However, delays appear to be more common for older breast cancer patients, as well as those who are African American or economically disadvantaged. Women with more aggressive types of breast cancer (e.g., triple negative (ER-/PR-/HER2-), HER2+, or inflammatory breast cancer (IBC)) are more vulnerable to the potentially adverse effects of treatment delays.
Delays between a diagnosis of breast cancer (using needle biopsy) and neoadjuvant chemotherapy (chemotherapy designed to shrink a tumor before surgery) have been linked to worse outcomes. Now a new study has reported that delays in neoadjuvant chemotherapy of more than 60 days after breast cancer diagnosis are associated with increased risk of death.

Why delay in neoadjuvant chemotherapy matters

Tumors of newly diagnosed women normally have been growing for several years before being detected. In cases of very indolent disease, very small tumors could potentially remain untreated for extended periods of time without affecting prognosis. Therefore, in order for a delay in starting neoadjuvant chemotherapy for early stage breast cancer to make a difference, the process of diagnosis must cause important changes. In fact, physically disturbing a tumor appears to increase its metastatic potential. For example, surgery has been shown to induce modifications in the expression of genes implicated in metastasis. These changes result in increased cancer cell proliferation and motility (ability to move), thereby allowing such cells to escape into circulation. It is possible that needle biopsies involving taking multiple tissue samples may cause the degree of damage to tumor tissue that could promote metastasis.
Another possible explanation for worse outcomes associated with treatment delays is the potential for needle track seeding. Needle track seeding occurs when breast cancer cells are deposited along the path of a biopsy needle as it is withdrawn from the breast. Evidence suggests that such seeding does occur 20% to 50% of the time. However, most breast cancer cells moved by biopsy needles do not survive — studies that have examined the question as to whether such seeding influences survival have been reassuring. However, even if unlikely, the potential for needle track seeding is another reason that treatment should occur in a timely manner after biopsy.