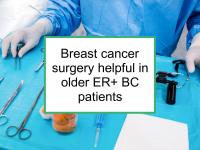 Breast cancer surgery helpful in old patients
Breast cancer in women over 70 has a different profile from breast cancer in middle age, tending to be less aggressive. While aggressive disease such as triple negative (ER-/PR-/HER2-) breast cancer does still occur in old women, estrogen receptor (ER) expression tends to increase with advancing age, while proliferation markers decline.
However, breast cancer-specific survival is not as favorable in this population as would be expected given the more indolent characteristics of the disease.
One 2011 study reported that women 75 and older did not experience the same gains in survival over the 1980-1997 time period as women under 75. The 10-year absolute risk of breast cancer-specific death declined by 15.3% (from 31.9% to 16.6%) among breast cancer patients aged 50 to 64. However, the decline was only 7.5% (from 24.8% to 17.4%) for women aged at least 75 years at diagnosis. In fact, another study reported that increasing age was associated with higher breast cancer-specific mortality among postmenopausal women with hormone receptor positive (ER+/PR+) breast cancer.
Treatment of breast cancer in old women often differs from the standard of care. Treatment choices are influenced by the perceived lack of aggressiveness of the disease and the presence of other medical conditions or frailty. However, this can lead to under treatment of some women who could benefit from standard treatment. Treatment decisions should be made on an individual basis, taking into account tumor characteristics and overall health. The healthier the woman, the more she might have to gain from appropriate treatment.
Until recently, most old women diagnosed with breast cancer would have surgery to remove the tumor if at all possible, whereas radiation treatment was sometimes and chemotherapy was often omitted. For the fortunate majority with slow-growing tumors, the omission of radiotherapy or chemotherapy might not reduce life span. More recently, there have been reports that older women with ER+/PR+ breast cancer who did not undergo surgery were treated successfully with endocrine treatment (aromatase inhibitor or tamoxifen) alone. Now a new meta-analysis of relevant studies has reported that omitting surgery in such cases results in a greater likelihood of breast cancer recurrence.

The study referenced at the beginning of this news story was designed to evaluate the effectiveness of endocrine therapy alone in older women with operable breast cancer. Study participants were at least 70 years old and healthy enough to have undergone surgery. To conduct the study, the authors performed searches of the Cochrane Breast Cancer Group's Specialized Register, the Cochrane Central Register of Controlled Trials, MEDLINE, EMBASE, the World Health Organization's International Clinical Trials Registry Platform and www.clinicaltrials.gov for relevant studies. The studies included in the analysis met eligibility and quality criteria. In each case the endocrine therapy used was tamoxifen. Data concerning 1,571 women (1,081 deaths) was extracted from the published trials to conduct the meta-analysis.
The authors reported a suggestive but not statistically significant result in favor of surgery with respect to overall survival (i.e., survival during the study period of each trial). However, surgery was found to be clearly superior with respect to recurrence. The risk of relapse was significantly lower for surgery alone compared to tamoxifen alone, and for surgery plus tamoxifen compared to tamoxifen alone. Side effects of tamoxifen included hot flashes, breast pain, vaginal discharge, cystitis, sleepiness, headache, skin rash, itching, indigestion, vertigo, hair loss, blood clots, nausea, and indigestion. Surgery-related adverse effects included tingling or burning in the affected arm and nearby chest wall in those who had axillary node clearance. One study suggested that those undergoing surgery suffered more psychosocial dysfunction at three months after surgery, a difference which had disappeared within two years.
The authors conclude that endocrine treatment without surgery should only be offered to women with ER+ diseases who are generally unfit for surgery, at increased risk of serious complications if subjected to surgery, or who refuse surgery. However, in ER+ women with significant medical conditions or diseases in addition to breast cancer, endocrine therapy alone may be the best option. The authors also comment that further studies are needed to evaluate the effectiveness of aromatase inhibitors as primary therapy for an infirm older women with ER+ tumors.
Please see our article on breast cancer in old age for more information.