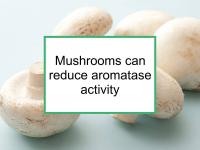 Mushrooms can reduce aromatase activity
Trial results presented at the annual American Society of Clinical Oncology (ASCO) Meeting indicate that white button mushroom extract has a mild influence on aromatase activity in postmenopausal breast cancer survivors. Aromatase activity is a process by which androgens are converted into estrogens in the body.
After menopause, aromatase activity takes place primarily in fat tissue. The resulting estrogens are then released into systemic circulation, potentially promoting estrogen sensitive breast cancer. The authors previously demonstrated that extract from the common white button mushroom contains phytochemicals that appear to be chemopreventive - suppressing aromatase activity, inhibiting breast cancer cell proliferation, and reducing mammary tumor formation in laboratory animals.
The trial, which was intended to determine the optimal dose to induce this effect in women, included 24 recurrence-free postmenopausal women diagnosed with breast cancer at least five years previously. All of the women had completed all breast cancer treatment (including any aromatase inhibitors or tamoxifen) at least three months before enrolling in the trial.
White button mushrooms were freeze-dried and pressed into tablets containing 500 mg of powdered extract. Each tablet contained approximately 5g of whole white button mushroom. Study participants were treated with 5, 8, 10, or 13 g of mushroom extract per day for 12 weeks. Aromatase inhibition was evaluated by measuring circulating sex steroid hormone and with an assay of aromatase activity developed in the authors' laboratory. A positive response to the mushroom extract treatment was defined as a decline in free estradiol (E2) of 50% or higher. White button mushroom extract up to 13g per day was found to be well tolerated, with no adverse side effects.
None of the participants met the pre-defined response threshhold of a 50% reduction in free estradiol. In fact, free estradiol was found to trend upward over the 12-week treatment period for women in the 5g and 8g dose groups and remain stable among the 10g and 13g groups. Assay measurements detected a consistent peak in aromatase activity in the 5g and 8g dose groups after meals. This effect was lower in the 10g group and not evident in the 13g group. The authors conclude that high doses of white button extract are well tolerated. An assay of aromatase activity was sensitive to short-term changes and demonstrated suppression of post-meal fluctuations with a 10g or 13g daily dose of white button mushroom extract. These results suggest that anti-aromatase phytochemicals are present in plasma with daily consumption of 100g to 130g (3.5 to 4.6 oz) whole white button mushroom, but not at high enough concentrations to significantly reduce estrogen levels from baseline in 12 weeks.

Comments regarding the study

It is clear that the authors expected to see a significant reduction in circulating estrogen in response to the dried mushroom treatment, but this did not take place. Subtle reductions in aromatase activity were observed. Population studies have consistently reported that mushroom consumption is associated with reduced risk of breast cancer. The effects may accumulate over a long period of time and be partially dependent on synergistic interactions with other foods. For example, one study reported that green tea consumption further reduced the risk of breast cancer associated with high dietary intake of mushrooms in Chinese women. Note that mushrooms should be thoroughly cleaned and cooked rather than eaten raw. Please see our article on mushrooms for more information on white button and other types of mushrooms.
Please see our article on how to optimize your breast cancer diet for information on what to eat during all stages of treatment and recovery.