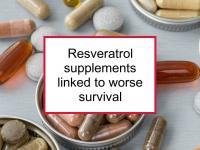 Resveratrol supplements linked to worse survival
Phytoestrogens are plant molecules that are structurally and functionally similar to human estrogens and can bind to and activate estrogen receptors. Examples include apigenin, enterolactone, genistein, luteolin, quercetin, and resveratrol. Generally speaking, phytoestrogens consumed in plant form (rather than as supplements) have chemopreventive properties.
In other words, phytoestrogens may prevent or slow breast cancer development, for example by suppressing aromatase activity, inhibiting proliferation or inducing apoptosis (programmed cell death) in breast cancer cells. On the other hand, xenoestrogens (man-made compounds that bind to and activate estrogen receptors) and metalloestrogens (metals with estrogenic properties) can in some cases promote breast cancer development or metastasis at very low concentrations. Now a new study has reported that increases in circulating levels of resveratrol, genistein, or luteolin (presumably from supplement use) are associated with less favorable five-year breast cancer survival.

Luteolin is a flavone phytoestrogen found in abundance in parsley and celery. Luteolin has been shown to have strong chemopreventive effects, involving inducing apoptosis, inhibiting angiogenesis, reducing aromatase activity and suppressing metastasis, including in multidrug-resistant breast cancer cells. Safe levels of luteolin have not been established. Very little previous research is available regarding luteolin supplements and breast cancer. One study suggested that luteolin could promote endometrial cancer (which itself is already a possible side effect of tamoxifen treatment).

Resveratrol is a phytoestrogen found in foods such as red grapes, blueberries and cranberries. While numerous studies have demonstrated strong chemopreventive effects of resveratrol, several studies have reported possible adverse effects for the pharmacological doses found in supplements (rather than the chemopreventive doses obtained from consuming resveratrol-rich food). For example, one study reported that resveratrol alone promoted mammary tumor growth and metastasis in a mouse model of estrogen receptor negative (ER-) breast cancer, whereas it inhibited it in combination with other grape polyphenols. Another study reported that supplementation with resveratrol plus zinc in a rat model of breast cancer significantly increased the rate of development and number of carcinogen-induced mammary tumors.

Genistein is an isoflavone phytoestrogen found primarily in soybeans. While soybeans (edamame) and tofu are generally chemopreventive, more highly processed soy-based foods such as soy protein isolate may be harmful. Genistein supplements have been found to be potentially breast tumor promoting in several studies. For example, soy supplements have been shown to increase expression of harmful genes in the tumor tissue of breast cancer patients. Soy isoflavone supplements appear to introduce increased risk of breast cancer recurrence in some women. High intake of soy isoflavones have been reported to increase the risk of cancer recurrence in HER2 overexpressing (HER2+) breast cancer patients. Several studies have found that genistein interferes with the effectiveness of tamoxifen. One study also reported that soy-based supplements might reduce the efficacy of breast cancer treatment with aromatase inhibitors.

The study referenced above was designed to investigate the impact of phytoestrogens on five-year prognosis of breast cancer. In particular, the authors examined the links between risk of death and postdiagnosis circulating levels of (1) enterolactone; (2) eight phytoestrogen metabolites; and (3) changes in enterolactone and genistein. Enterolactone, which is not typically consumed as a supplement, is a phytoestrogen produced by intestinal microflora in the upper part of the colon from lignans found primarily in flaxseed, whole rye, and whole wheat. The study included 2,105 postmenopausal German breast cancer patients. Blood samples were obtained between entry into the study between 2002 and 2005 (baseline) and at a follow up interview in 2009.
The associations between circulating enterolactone and five-year survival were found to change over time, with 11% reduced risk of breast cancer-specific death at baseline and 14% reduced risk at the two-year mark for relatively high levels. The risk of death from any cause was reduced by 13% at baseline and 16% at three years after study intake (these results became weaker over time).
Long-term survivors whose blood levels of resveratrol, genistein, or luteolin increased between baseline and follow-up measurements had worse five-year survival. Women with increasing levels of resveratrol experienced a 19% increased risk of death. The increased risks of death were 17% for genistein and 96% for luteolin. Changes in blood levels of enterolactone between baseline and follow-up were not associated with prognosis, nor were changes in the ratio of enterolactone to genistein. The authors conclude that large long-term studies incorporating multiple phytoestrogen measurements are needed to understand the long-term prognostic effects of phytoestrogens in those with breast cancer.
For more information, please see the following: enterolactone, genistein, luteolin, phytoestrogens, or resveratrol.