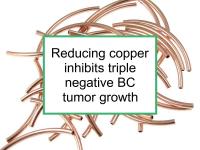 Reducing copper inhibits triple negative BC tumor growth
Copper is a vital nutrient required for normal iron metabolism and blood cell formation. Women with low iron stores are at risk of anemia if they do not have adequate copper intake. However, excess levels of copper have been linked to higher risk of breast cancer and its progression. In fact, tumor tissue concentrations of copper tend to be elevated in breast cancer patients and can be very high.
Now a new study has reported on a novel copper chelator which can inhibit tumor growth and significantly extend survival in mice bearing triple negative (ER-/PR-/HER2-) tumors.

Copper has been shown to promote angiogenesis (new blood vessel formation) in existing breast tumors, as well as to facilitate breast cancer cell migration and invasion. Copper also appears to have a role in evasion of the immune system by cancer cells. It has been demonstrated that careful manipulation of copper levels in tumor cells can alter intracellular processes to favor the induction of apoptosis (programmed cell death). In fact, reducing available copper appears to affect multiple facets of the tumor microenvironment, resulting in an inhospitable setting for tumor progression.
Substantially lowering copper levels in breast cancer patients at high risk for recurrence using a copper chelator (a drug designed to lower circulating copper) also appears to promote tumor dormancy and help prevent relapse. Inducing copper deficiency has been shown to reduce tumor development and angiogenesis in mouse models of HER2/neu overexpressing (HER2+) and inflammatory breast cancer (IBC).

The following foods have high concentrations of copper:
Calf's liver contains 12 to 15 mg of copper per 100 g (3.5 oz.), which is well above the recommended dietary allowance (RDA) of 0.9 mg per day. On the other hand, the copper content of chicken liver is only about 0.5 mg per 100 g. The foods below contain far less copper than calf's liver, but are potentially significant sources of copper, depending on the frequency and volume of consumption:
Most nuts are a significant source of copper. However, walnuts have significant chemopreventive properties and should be consumed in moderation rather than avoided because of its copper content. The copper content of most common foods can be found at SELFNutritionData. Note that curcumin, the most biologically active ingredient in turmeric, has been shown to act as a copper chelator.

Other sources of copper exposure

U.S. residents typically consume more than enough copper. In fact, copper deficiency is rare. Despite this, most multivitamins, including those for women and seniors, contain copper. Copper cookware and copper jewelry (including red, rose or pink gold) are other potential sources of copper exposure. It has been demonstrated that copper bracelets can deliver copper through the skin. Soldering or otherwise working with copper can also result in exposure. In addition, living near copper mining or smelting operations can result in inhalation of airborne dust containing copper.