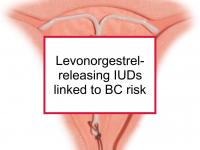 Levonorgestrel intrauterine systems such as Mirena, Liletta and Skyla are placed in the womb, where they slowly release levonorgestrel to prevent pregnancy for three (Liletta and Skyla) or five (Mirena) years. They are replacing the copper IUDs that have been used for contraception for decades. Levonorgestrel intrauterine systems are also used to treat abnormal uterine bleeding and endometrial hyperplasia, as well as to reduce rates of endometrial polyps in women using tamoxifen. At the moment, the use of LNG-IUS is contraindicated for women with current breast cancer and not usually recommended for women with a personal history of breast cancer and no evidence of disease for five years, apart from those on tamoxifen.

The Finnish study referenced at the beginning of this news story was designed to investigate the association between use of levonorgestrel-releasing intrauterine system (LNG-IUS) and breast cancer risk by histological breast cancer type. Prolonged use of hormone replacement therapy (HRT) has been linked to increased risk of breast cancer, especially lobular breast cancer. However, the effect of LNG-IUS use has not been established and is controversial. LNG-IUS (Mirena) was first developed and introduced in Finland during 1990.
To conduct the study, the authors used the national Medical Reimbursement Registry of Finland to identify women who had used LNG-IUS for the treatment of abnormally heavy menstrual bleeding between the ages of 30 and 49 during the period 1994-2007. The authors also used the Finnish Cancer Registry through year-end 2012 to identify breast cancers diagnosed before the age of 55, particularly among the LNG-IUS users. A total of 2,015 women were diagnosed with breast cancer during follow up out of a total of 93,843 LNG-IUS users. The LNG-IUS users were found to have increased risks of both ductal breast cancer (20% increase compare to the general female population) and lobular breast cancer (33% increased risk). The highest risks were found among LNG-IUS users who used the device the longest (i.e., who purchased it at least twice). Among these longer-term users, the risk of lobular breast cancer was 73% higher than the general population. The authors conclude that intrauterine administration of levonorgestrel is related to greater risk of lobular breast cancer, as might have been expected based on the experience with HRT, but also, contrary to expectations, to increased risk of ductal breast cancer.
Please see our article on oral contraceptives for more information.